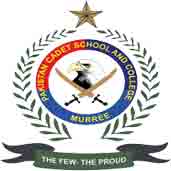 The Cadet School and College murree envisages to impart quality education to its cadets on modern and scientific lines. Our mission is to carve acreed strong and confident enough to shoulder the responsiblities of future leadership.
Pakistan Cadet College Murree is an independent College, which provides training and education following military traditions and customs of the Pakistan Army. Cadet College Murree, governed by the Board of Directors, is a non profit, interdenominational institution, and is not an official activity of the Pakistan Armed Forces. It has been founded and organized by retired personals of armed forces who firmly believe that an education on the pattern of armed forces not only groom leadership but also produce disciplined and well educated youngsters.
Correspondence regarding all College matters should be addressed to the Principal, Cadet College Murree.