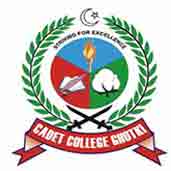 Keeping in view the vision of inculcating quality education patterned on lines of military discipline, code of conduct and character to the students of this illiteracy hit district of northern Sindh, the scheme of foundation of Cadet College Ghotki was sponsored by Ministry of Education Government of Pakistan with an approval of Rs. 167 million. For the purpose, the District Government Ghotki provided with 253 acres of land free of cost. Later, the National Finance Commission (NFC) handed over the college to the Government of Sindh. The Government of Sindh (Education and Literacy Department) approved new PC-1 named as “Remaining works of Cadet College Ghotki” with an approval of 497.971 million. It was, later, revised with approval of 745.027 million. The foundation stone was laid by the then honorable chief minister Ali Muhammad khan Mahar in 2005, hence the construction work began. Flowing against the tides of meagre resources and insufficient infrastructure, the pioneer Principal Honorable Professor Naseem Ahmed Memon took off with commencement of the first academic session on November 08, 2010, with initial intake of 114 cadets. Up to now, three batches of cadets have successfully passed out, while at Present, the college has strength of 367 cadets in class VII to XII. Committed with its mission and vision the college is developing rapidly in its all aspects with the financial patronage of the Government of Sindh, under supervision of the Board of Governor and dedicated endeavors of the College staff.