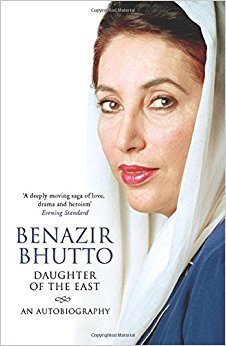 Daughter of the east is one of the most influencial books for the young generation especially when it comes to women it is a must read.Daughter of the east is an autobiography of Benazir Buttho. The language of the book is very easy and understandable moreover this book makes the reader to involve and image the events described in it.  This book has shown how incredibali strong a women is. Benazir is not only popular in Pakistan but also renowned in the western states as the first post Colonial Muslim Women Prime Minister.After reading this book it has become certain to me that every women has the strength and power to achieve any possible goal when she is passionate and has firm belief in it.
In this book Benazir Bhutto has narrated the story of a young women that how she become a strong and independent politician and a leader of a Nation. This books tells about the early years of the life Benazir Bhutto that she has spent with her parents and her siblings. In the first half of the book she has focused on the role Zulfiqar Ali Bhutto has played as a father to bring up benazir and her siblings. as a politician her father has suffered cruelty and atrocities of the military regime. the injustice that her father had gone through which leaded to the execution of Zufiqar Ali Bhutto.
Benazir has also narrated the terrible and horrendous circumstances she, her friends, family and relatives went through during the millitary regimes. After becoming Prime Minister she has suffered the loss of her brother. she was is a women who has been jailed, she was exiled from Pakistan but her desire to serve the nation had kept her strong. After Reading the book i am convinced that if Benazir would have survived and contested the elections of 2008 Pakistan could have emerged as stronger independent state of the world.
This book has confirmed that a human can turn impossible into possible with conviction and Passion. when no biased towards any political party i believe that Daughter of the east is very inspiring book for youth and specially the young women.