A baby is born with a genetic set from parents and grandparents to determine the bodily features of his or her body but the mind is a clean sheet.  The baby grows up with set of values that he learns at home, school and society. The mental pattern of a baby forms in accordance with the environment and eventually the baby becomes a full grown mature individual. In the shrinking world the interaction between these individuals from different nook and corner of the world are more likely to take place.  All of us might have some similarities but there lies uniqueness in every one of us. This uniqueness makes us able to resolve the issues that arise everyday in our lives. Every person has a different way to see the world as there is no fixed formula for operating minds.

Technological advancement and globalization has increased the platforms of interaction amongst people where people are working on eradicating issues of child abuse, women harassment, labour rights, prevention of AIDS and other major concerns like global warming. The technology has combined us on one hand but on the other hand the hate messages, heated unnecessary argumentation, character assassinations and cyber bullying has left us hanging as a pendulum between right and wrong. The respect for others and their opinion has been lost in the frost of ‘Only I am write’ and ‘I know all’.

The societies progress when they work together in unity. Unity can only be created when there is acceptance for one another. In a group of hundred people everyone cannot carry same perception only accepting the difference can help them work together. Having tolerance and acceptance towards other is not a sign of cowardice but bravery. Tolerance does not ask you to follow others blindly or doubting your own capabilities but it teaches you to have the scope of learning from others. 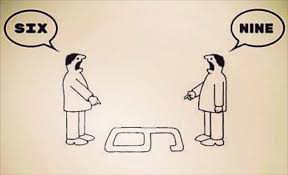 What is the digit on the floor? Is it a 6 or is it a 9, it is actually both 6 and 9. Every phenomenon that we confront in life is actually like this digit written on the floor. You might not be wrong but the other person might be standing on the other side which makes them right too. Do not bluntly criticize people for the opinion they hold because they are not always necessarily wrong. The political debates have divided individuals between 2 major blocks. These groups have completely forgotten that every individual has the right to hold on to what they perceive and the way they perceive it.

Don’t be a coward criticize what you feel is wrong but selection of words is very important. The insulting language will convey nothing but intolerance. Respect the personal life of people and be sober in your approach towards others. Your words do not show what others are but it high lights what you are. Love and tolerance is the only key to harmony. Hatred has never lead any society or state towards success. If aggression and hatred could lead anywhere closer to success than Adolf Hitler would have claimed victory in world wars. Do not judge people with their political preferences because we are all human first our alliances come later in life.

The foundation of our religion Islam was laid on love and tolerance. The foundation of Pakistan was laid on the concept of acceptance and equality. All of us have right of expression. If you want your rights you must learn to give it to others too. Be peaceful in your approach towards support and criticism. Let’s not divide Pakistan on the basis of nationality, politics, religion or economics. Let’s be humans first and anyone else later.

So look closely at what content you are sharing on social media. What can be the long term impact of the words you utter? How hurtful can your words prove to be? Be a sensible and tolerant critic. Loud voices and indecent words can only scare other but not convince them. Spread love unity and tolerance rather than hatred and aggression.